In the latest “steinbeis swipe” article, Thomas R. Villinger calls for more urgency when it comes to research and technology

Throughout the land, there is increasing discomfort that Germany is falling behind in the fields of research and technology. The long rounds of discussion regarding the “education pact” and the poor quality of cell phone networks show that there is a need to take action. But there’s little use standing in front of one wailing wall while pointing a finger at another. Mutual accusations don’t solve anybody’s problems. Of course the public sector needs to do its homework in some areas, but until it does, the top performers in business and science must not be allowed to sit back and do nothing.

We need to look beyond the end of our noses. For a number of years, the venture capital fund ZFHN has been working in close collaboration with startups and VC companies in the United States, Israel, and China. What do companies and governments do differently there? What works better? And what can we in Germany do to learn from others?

WE NEED TO GET FASTER

The Chinese are much quicker than the Germans at making a success out of new products and getting them onto the market. “The fast ones eat the slow ones” – especially in times of Industry 4.0, automation, and artificial intelligence (AI). To a certain extent, we should get a move on in Germany and start thinking “speed first, then thoroughness.” We could also push developments without having to be 100% sure that products are really going to last 50 years. Product cycles are getting shorter, leaps in technology are getting bigger, and customers are quick to lose interest. This is not meant to be a call for sloppiness and more production faults, but there are so many products that could be developed with the help of customers yet still made market-ready quickly.

Another thing we can learn from the success of many Chinese firms is “mobile first.” Major parts of the everyday value chain in China are now taken care of with smartphones. These little helpers in our pockets can be used for shopping, reservations, banking, and lots of other everyday tasks. Desktop PCs and laptops are becoming a thing of the past. This is another area where there is still “plenty of room for improvement” in Germany, so we need to do more to push the right business models.

A key feature of new companies in Israel is their almost childish curiosity: People always seem to want to get to the bottom of things: Do we really have to accept this problem, or isn’t there another way of doing things? This innovative anarchy drives progress and does so at great speed. Furthermore, the Israelis have learned from “being cut off” and make do with the resources that are available to them. They would rather improvise than wait for a new, expensive machine. It’s almost like their motto is “impossibility is an irrelevance.” This accelerates the speed at which new technologies are developed. There’s even an idiosyncratic word for this Israeli mentality, which is even used in business: chutzpah. Chutzpah means audacity, a certain shrewdness, agility, and willingness to take risks. And that could certainly provide us with a role model.

THE KEY TO SUCCESS: MORE EDUCATION

They particularly value education in Israel, especially in math, IT, science, and engineering. Access to mathematics and science in early childhood lays a foundation for a solid understanding of modern technology. This is one area in which Israel is most definitely on the right track by providing people with a renewable “raw material” in the long term: education. Giving our schools modern tablets and WiFi, paid from the new pot of money provided by the German digital pact, is surely a good start – but here, too, we must keep up the momentum.

By pointing to the advantages of young companies in China and Israel, I’m not trying to sweep those famous “German virtues” under the carpet. The right way forward will be to pull together the best of both worlds. This will be possible by getting new companies from China and Israel to work alongside established firms from Germany. One recent example of this is the AI startup INSPEKTO from Israel, which ZFHN invested in more than a year ago. The company is now working in close collaboration with manufacturing companies in southern Germany. ZFHN would like to become involved in more such partnerships.

Thomas R. Villinger has more than 25 years’ experience in venture capital. Before co-founding and becoming the CEO of ZFHN in 2006, he held a variety of national and domestic positions. His focus lay in mergers and acquisitions, venture capital, and the procurement of private equity for expanding companies in Europe, the Gulf States, and the United States.

Thomas R. Villinger is a supervisory board member of a variety of early-stage equity holdings and is a sought-after expert in the financing of tech startups. Most recently, he lent his support (as founder and director) to the setting up of Innovationsfabrik Heilbronn GmbH, an important business incubation center. For years, Thomas R. Villinger has been personally involved in international tech startups himself, primarily as an active investor. 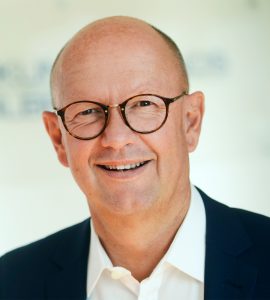