In 2012, new systems came along that allow orthopedic surgeons and trauma specialists to observe ceramic implants going through virtual motions using mobile end devices. This technology is delivered by the BIOLOX app developed by the Steinbeis Transfer Center for Technical Communication – Paracam in collaboration with CeramTec GmbH TRANSFER magazine talked to Prof. Dr. Michael Bauer about the things that make this development so special and other projects currently being worked on by the Steinbeis Enterprise.

Hello Professor Bauer. In 2012, your Steinbeis Transfer Center shared the Steinbeis Foundation Transfer Award – the Löhn Award – with the Plochingen-based company CeramTec, which is an international leader in ceramic hip joints. How did this partnership come about?

We’ve been working with CeramTec since 2004 – quite some time before we won the Löhn Award together. CeramTec was quick to spot and exploit the teaching benefits of new media. New types of media make it possible to create a whole host of 3D animations, videos, and interactive applications which allow orthopedic experts and trauma surgeons to obtain information on a company’s ceramic implants and how they’re used in clinical applications.

You developed an app called BIOLOX with your project partner. What makes this app so special, and what was the biggest challenge you faced when introducing it?

What’s special about it is that ceramic implants such as artificial hip joints can be observed in motion using virtual reality on an interactive 3D app installed on mobile end devices. To do this, we integrated implants into a model of a kind of “see-through” human body. Our nickname internally for this was CeraMan. He provides physicians with a different way of looking at things because these kinds of implants can normally only be looked at when they’re “at rest,” i.e. on the operating table or on an X-ray screen. The challenge was to make CeraMan as near as possible to medical reality and make sure he worked in real time, so for example he had to be depicted on a cell phone or tablet, but it also had to be possible to combine him with existing media, such as videos used in the operating room, animations, or brochures. As a whole, this was quite a complex setup.

And that was six years ago already. What other exciting projects has your Steinbeis Enterprise been working on in the meantime? What’s planned for the future?

Paracam works in two main areas – in medical technology and in the field of geology, or paleontology. There’s been one special project we’ve been involved in over the last three years – creating a “geo-relief” for the recently opened explorhino Science Center in Aalen. We built a two- by four-meter landscape with a special relief to show the whole area covered by the Swabian Jura mountains. There’s a high-resolution projector positioned nine meters away to cast precisely fitting maps and animations onto the relief. Visitors can choose from a selection of 60 maps and 20 animations on a touchscreen. The project has resulted in an entire 3D atlas of the Swabian Jura mountains. Other exhibitions and museums have now asked about similar installations.

Digital solutions are everywhere now and the trend has made its way into teaching and learning materials. What opportunities, but also challenges, does this present to you in your work at the Steinbeis Enterprise?

In the media sector, one technical revolution follows hot on the heels of the other. But that’s what makes this profession so exciting. Paracam tries to be directly in the midst of things as each new development moves up a notch and becomes more serious, i.e. when they can be developed into meaningful teaching applications. One such topic at the moment is augmented reality, which is making it possible to merge real camera images of things around us with virtual reality. We’re currently working on a similar development for the BIOLOX app. In fact we’ve already finished the prototype. Now, CeraMan no longer walks around in an artificial world, he can be made to look like he’s walking through your office.

Winner of the Löhn Award in 2012: the BIOLOX app 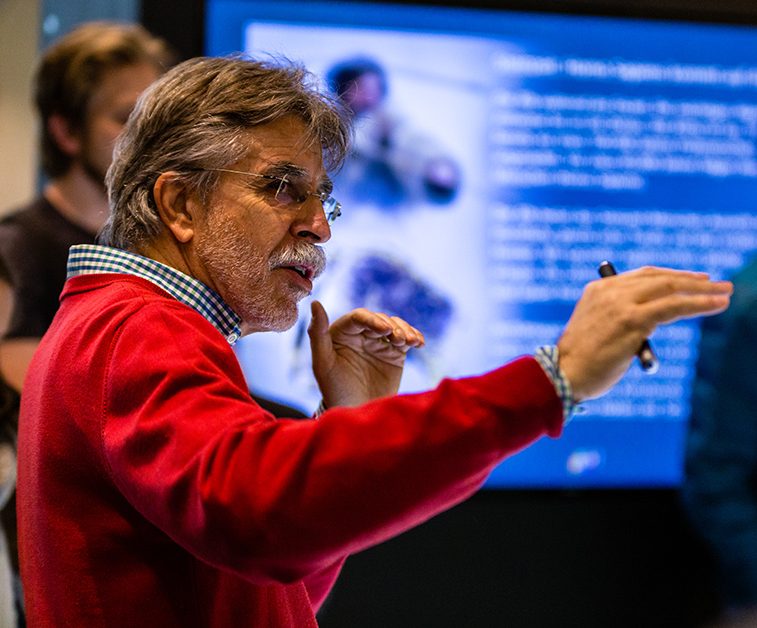