In an interview with TRANSFER magazine, Professor Dr. Ralf Kindervater describes the work of BIOPRO Baden-Württemberg GmbH, its goals, how its work translates into business practice, and much more.

Hello Professor Kindervater. BIOPRO was founded in 2002 as the State Agency for the Promotion of Biotechnology. What were the objectives at the time for setting up the agency?

BIOPRO was set up solely as a biotechnology agency as part of a development initiative focusing on biotechnology. Bioeconomics and the healthcare industry entered the picture ten years later. The aim was to pull the four bioregions together to form a state-level initiative. There were already a number of precursors to the organization, which had tried to do the same thing, but they were unsuccessful. The third move entailed establishing BIOPRO as a state agency and to use this as a springboard for networking four bioregions in Baden-Wuerttemberg: Heidelberg, Freiburg, Ulm, and the metropolitan area in and around Stuttgart. At that point, biotechnology areas were only really known in Bavaria, North-Rhine Westphalia, and Berlin. Baden-Wuerttemberg did already have a large number of renowned research institutions and universities, plus certain business establishments encompassing around 130 biotech companies, but they were basically not linked to one another. As a result, one of the central tasks of BIOPRO was to take the four existing bioregions and form them into a uniform overall entity within Baden-Wuerttemberg for the field of biotechnology.

BIOPRO has developed successfully since it was set up. What were the reasons for moving things forward and what are the current goals?

We totally understood that our task wasn’t just to concentrate on looking after biotech firms and keep the general public up to speed with the status of current research, which is a societal role we now fulfil through two state websites. It’s especially important to ensure people are kept informed, especially with new technologies, to provide society with an objective picture. But a technology isn’t an end in itself – it’s an engine of innovation. So the question we asked ourselves was which sectors of industry could be made more innovative by using (new) biotechnology. We dovetailed this with specific factors in the state, so on the one hand we knew which research institutions were looking into which issues, but we also knew in which companies these research results could be implemented. The next task was to take everything into the sectors of industry where it could be used. The first sector we worked with was the pharmaceutical industry, where we referred to the process as industry biologization – which incidentally is a topic that’s quite relevant again. The aim at the time was to take research insights and use these to bring together corresponding biotech firms with the pharmaceutical industry. The second sector of industry we started to look at in 2006/2007 was medical technology. This is a field that belongs to those who become involved in radical innovation. One example of this is Aesculap, which many years ago invested in TETEC to work together in the field of biological knee cartilage implants and spine implants. This is the kind of partnership that shows that a classic medical technology company can also make a success out of current biotechnology trends. Next came the chemical industry, one of the most successful examples of which is our business cluster for biopolymers and biomaterials. Its aim is to develop polymers based on renewable raw materials. But to succeed as an agency of innovation, you always have to stay one step ahead. Our biopolymer/biomaterial cluster empowered us to act as the ideal enabler for moving Baden-Wuerttemberg forward, even in an area like the bioeconomy. That’s exactly what we’ve been doing since 2010 and as a result, in 2013 an amendment was made to our articles. This meant that BIO-PRO was no longer just about being a biotechnology agency but also an executive partner in developing the healthcare industry and bioeconomy in the state. Since 2017, we’ve been involved in the development of a state strategy for a sustainable bioeconomy. Another important area we started working on in 2018 has an impact on the healthcare industry, which in terms of export power ranks number three among all industries in Baden-Wuerttemberg, after mechanical engineering and the automotive industry. The state government has acknowledged this and it’s now triggered a process which will be made public in July: dialog on the role of Baden- Wuerttemberg as a player in the healthcare industry. This will be social, scientific, and business dialog aimed at safeguarding the future of the healthcare industry in Baden-Wuerttemberg. This is also an area affected by radical change due to digital transformation, personalization, and a whole slew of new technologies. Then there are issues such as EU regulations, like the new medical product legislation and in-vitro diagnostic regulations. These pose a major threat to our companies, which are typically small or medium-sized businesses. All of these topics will flow into the dialog, which we’ll also help shape.

Biotechnology is one of those key technologies offering tremendous potential to innovate and fuel convergence, but where there are opportunities, there are also risks. Which trends will dictate the future of the industry, and what challenges do they entail?

Like all new key technologies, biotechnology offers potential – but yes, it also entails risk. Let’s take genome editing based on CRISPR/Cas9 as an example. This technology makes it possible to split DNA precisely, almost like you would in a garage laboratory, though in that sort of place you can’t really fathom the implications of what you’re doing. Of course this method has potential. If diseases are genomic, you can spot and heal them. But what might be the side effects of such treatments? And of course, there are ethical issues. These are the sort of topics or issues that crop up when technologies are developed for the first time, or redeveloped, and they’re the sort of topics society, science, and business need to think about. The task of a state agency – and this is our remit – is to strive for public dialog on these topics. This is exactly the way it is for the bioeconomy. You have to ask yourself whether our consumer-centric lifestyle is right if we want to preserve our planet for the generations to come. And of course this is where responsible innovation plays a role – not innovating come what may, but innovating with a certain sense of responsibility and consideration for the impact of innovation. That brings us back to the topic of understanding the impacts of technology.

The bioeconomy bridges a gap between technology, the environment, and efficient business. So it acts as an enabler of biobased, sustainable economic growth. Sounds good, but how does that translate into business practice, especially in Baden-Wuerttemberg?

When an economy is fully developed – like the economy in Baden- Wuerttemberg, which is a cohesive whole and booming – changes like this are only possible in small steps. For example there are a couple of rural areas where people have been working on biotechnology for years and they’re doing everything they can to be independent and supply their own energy with solar power, wind energy, and bioenergy. But these little areas are of course predestined to turn their bioenergy villages into bioeconomy villages. Even in the cities there are signs of the beginnings of such bioeconomies, like pyramid systems for using wood scrap. But of course people have to enter into a continual dialog with public bodies, as well as key players in the private economy, which is what we’re doing. The areas where we think interacting with us and our machinemakers/mechanical engineers will accelerate bioeconomic systems are the partnerships we have with EU projects. A good example of this is our INTERREG project along the Danube corridor: DanuBioVal- Net. Our aim here is to interact with non-bioeconomy clusters to share the acquired knowledge of the bioeconomy with traditional sectors of industry. We’re the ones who have to manufacture the bioeconomic machine technology. We’re the ones who have to take it out to people and enter into bioeconomic partnerships with local companies. And then, at the end of this process, the semi-finished products and end products of bioeconomical production come back to Baden-Wuerttemberg. So we have to use small, local activities and steer bioeconomic developments in close collaboration with partner states and do this in such a way that Baden-Wuerttemberg finds itself in a win-win situation, which it can benefit from on several fronts. The issue of digital transformation is also important, because we can use eco-evaluations, life cycle assessments, and biodiversity analysis to simulate and model lots of raw material sourcing scenarios, from conversion, to adaptation into semi-finished products, or even further processing into end products; and based on this, we can make decisions that are right for the future of our state. 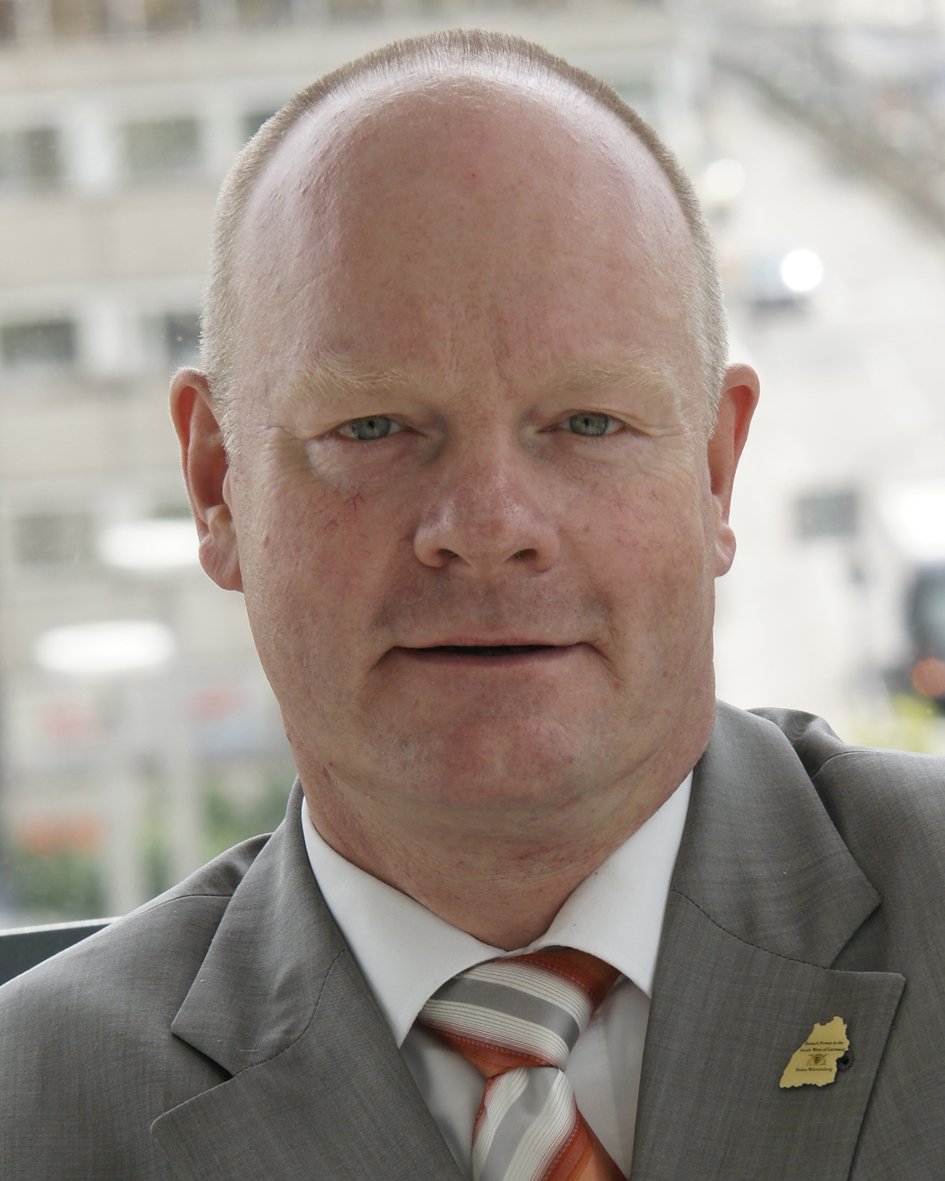 Professor Dr. Ralf Kindervater is director of BIOPRO Baden-Württemberg GmbH and honorary professor at Karlsruhe Institute of Technology (KIT) in the department of chemical engineering and systems control engineering. BIOPRO Baden-Württemberg is a state agency for the promotion of bioeconomy and biotechnology issues, as well as the pharmaceutical industry and medical technology (healthcare industry). It has set itself the goal of representing interests in these areas in society and highlighting the benefits of innovations.